"I really have to fudge this data to get it anywhere close, and I have no idea what I am doing." 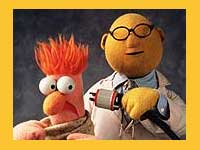 Thanks to images of the white lab coated-savior of the 1950s and technological advances we all enjoy in the west, scientists and science has enjoyed a very positive reputation over the years. One almost gets the feeling that these men are nobler than others, more concerned about detail, accuracy, and good work than mere mortals.

While there are fine scientists doing great work, there are lazy, incompetent, foolish, and sloppy people in the field of science just like every other job. Science does not have a unified voice on any subject except the most fundamental of efforts; there is no "Science Pope" who speaks with the final, infallible voice on a given topic.

Ace of Spades Headquarters had an amusing story about a lab report that illustrates this well:

I don't think he turned this paper in. But I do think he did all the experiments, turned in a dishonest and unscientific paper, most likely with fudged data, and then wrote this accurate, honest, truly scientific assessment of his experiment.

Abstract: The exponential dependence of resistivity on temperature in germanium is found to be a great big lie. My careful theoretical modeling and painstaking experimentation reveal 1) that my equipment is crap, as are all the available texts on the subject and 2) that this whole exercise was a complete waste of my time.

Going into physics was the biggest mistake of my life. I should've declared [Computer Science]. I still wouldn't have any women, but at least I'd be rolling in cash.

He exposes a critical truth: college (and most definitely) high school science lab experiments primarily teach people how to lie about their data, and secondarily about futility and the total uselessness of experimentation, which really aren't the first things you want budding young scientists learning.

I think he wrote this for the Journal of Improbable Research, though it's probably representative of his real-life experience. I remember that in one physics lab I had to measure the speed of a muon, and no matter what I tried, I ended up with 1.1c (i.e., faster than the speed of light). I finally gave up and just presented the results to the professor (who looked just like Dr. Bunsen Honeydew). He reviewed everything I did, then shrugged and gave me an A-.

Experimentation sucks - that's why I try to stick to analysis.
-by geoff

He's right about the money in CS, at least. I've been thinking about going back to grad school, and this is a good reminder of some of the downsides.
-by SparkVarc

I studied physics as an undergrad. And, there really is a third year lab wherein you do some classical experiments with terrible equipment.

Of course, when I was in school we still used vacuum tubes for op-amps -- so no germanium experiments.

On the other hand, there really is such a thing as "the art of the experimentalist". We were doing a transmission line experiment, trying to match impedences and such, and of course nothing was working at any of the six stations in the lab.

Along comes a young experimentalist (name withheld) who was maby four years older than us -- I had the guy for second year course the year before. He had his own (real) experimental lab down the hall and was taking a break and stopped in to kibbutz.

In the space of ten minutes he walked around to each station, LAID HIS HANDS ON THE EQUIPMENT, and got the experiments to work.

I did switch to Computer Science.
-by Eric Rogers

How times have changed since I was in college. When my lab partner and I had an experiment that didn't work, we didn't have no stinkin' computer with which to calculate the therortical result to turn in with the paper. WE had to copy the ideal curve from the text book and then randomize the data around it using a die (variance of 1 to 6 percent) and then flip a coin to determine whether the variation would be positive or negative for every freakin' data point. It was just hell to do hungover, I tell you. That's why I got out of the sciences (Hell, I never got past Organic Chemistry). It worked out; I like drivin' this truck.
-by Lokki

My high school physics teacher was a rocket scientist. The government made him work on the Mercury program, and he helped design the innards to withstand the stress and strain of liftoff and reentry and not kill anyone inside. After that, he got tired of doing governmental work and became a teacher. He had taught for about 38 years.

I was doing an experiment involving diffraction and interference patterns of light: stare at a light source through a slit and see what you see, and all that, wave properties and the like.

My data was entirely messed and didn't match up with the theoretical stuff. I had to stretch to get anything close to the theoretical answer. I was totally lost. So I wrote what I could in my conclusion, and closed it like this:

"I really have to fudge this data to get it anywhere close, and I have no idea what I am doing."

Hah, his data looks a lot like what I got for most of my experiments in my materials class (I'm an engineering student.) You know when you have a standard deviation of 20 points for one of your values that SOMETHING is screwed up, and all the help the TA will give you is to tell you to "write about what was SUPPOSED to happen." Sheesh. That report is pretty much what I wanted to write for every lab I've ever done in every class I've taken in college.
-by Tina

Science and Technology
Posted by Christopher R Taylor at 8:35 AM

Too funny...until one realizes that these same people who have learned to be unethical for their grades will probably carry those same lessons into their work as researchers. After all, they KNOW what their data was supposed to look like. How many companies do you suppose are bending the rules for their test results to come out right? How many of the scientific journals publish studies that showed the results the researchers wanted rather than what is true? I can think of a couple studies off-hand. Fortunately, there are ethical souls that will call them on their falsifications. How about scientists, who are human after all, who don't even realize they've actually caused their work turned out just the way they wanted it to?

Science is one of the new gods in our culture. I'm not sure its high priests can be trusted to be bias and error free, and I don't think I want to worship this god.