HOME ON THE RANGER 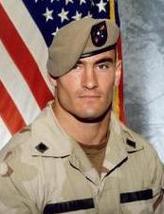 A number of blogs are having fun at the expense of Jesse MacBeth (formerly Jesse Al-Zaid; name changed when he was 2), hapless anti-war activist who falsely claimed to have earned various citations and medals while serving in Iraq. This fellow put out a short film and was part of the group Iraq Veterans Against the War, but has been so thoroughly debunked that it is almost a running joke on conservative blogs.

However, Baldilocks' coverage on this is something that is different and appropriate for this blog. In all the furor, it was pointed out that Mr MacBeth was not an Army Ranger at all. And here is where a commenter on Baldilocks' blog noted:

Oh, for crying out loud! When will people learn how to read!? I'm tired of entering the same blasted comment on every excitable blog on the planet.

If you to back and read the original post from JustCitizens, you'll notice that the Army rep say ONLY that MacBeth has no record of having served in the Rangers or Special Forces. What he did NOT say is that MacBeth had no record of service of any kind.

Who here does not understand this? I'm not saying this proves MacB was in the service; I'm just saying too many people are distorting the facts as stated.

Baldilocks, a woman of honor and integrity, responded:

Casey, you are correct in your discernment that I did not read the Just Citizens post closely enough to discover that the Army representative who responded did not disclose whether one Jessie MacBeth served in the Army in any capacity. I thank you for pointing out my error via your most-polite correction.

And this points out, in the long run, something more important and significant than the lying attempt to attack a war by some fellow who'll be forgotten next month. Blogs are self-correcting and useful only as long as the people who work on them will admit error, correct without rewriting text, and by using updates to alert when things were changed.

Here's an example of such corrective work, from the very popular Hot Air blog:

If you see it anywhere else, e-mail us or leave a comment below and we’ll update. (Update: Radio host Jay Severin eats up Macbeth’s bilge with a spoon. See update below.) (Update: Totally wrong on Severin. That’s an attack site. See the update below.)

The following update has this correction:


[UPDATE: Totally wrong. That’s a Jay Severin attack site, not Severin’s own site. The jackass who’s attacking Severin is the one who fell for it hook, line, and sinker. My apologies.]

This kind of correction and adjustment is very healthy for blogs, and it shows a level of fact-checking and honesty that legacy media such as newspapers cannot achieve and television is ill-suited to exercise. To this date, sites such as CNN.com will run incorrect or mistaken information (and have often in the past), but correct the entire page, replacing the error, with no clear notation and corrections on a seperate page.

This was fine for newspapers, when you have no choice but to run corrections and updates in a seperate printing. But for an online site, it is dishonest and misleading not to correct in an obvious way.

And what's more appropriate for this blog and more significant overall is that it is commenting that drives many of these corrections. It's happened on my little blog in the past, and it happens on bigger blogs on occasion. Many blogs will update a story based on information commenters offer and post about, adding to the news from various sources. Commenting gives a blog ammunition and a level of fact checking and research that a single person simply does not have time or energy to accomplish alone.

Commenting drives the blogosphere, even for blogs that do not have a comment section. Emails and other blog updates all add up to the same effect - a greater degree of accountability and accuracy than legacy news sources can offer, greater than they are inclined to offer.

News Media
Posted by Christopher R Taylor at 11:53 AM

Thank you, my friend.

Mr. Taylor, you may find my comments about my exchange with Juliette here.

I have to say your choice of blog topics is both interesting and ...unique, dare I say it. :)