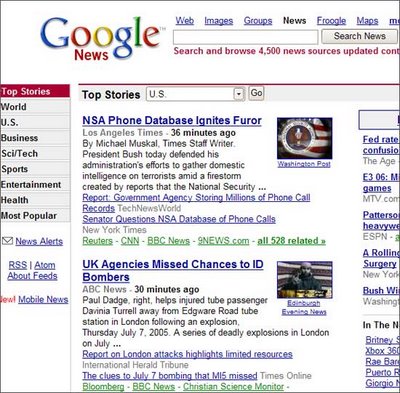 That kind of says it all, doesn't it? The Indepundit thinks so too, and commenters on his site had this to say:

Yes, that picture says it all, doesn't it? IMHO, any one who holds a security clearance, and leaks confidential information to the press, should be subject to justice under UCMJ, not civilian courts.
-by Barb

This kind of argument is easy. But where do you draw the line?

Should we do away with search warrants entirely? Should all domestic phone communications be monitored? Presumably there is some line that each of us will draw and in so doing take away some tools that law enforcement could benefit from.

My biggest problem with Bush is less what he has done here - I have no problems with the programs revealed so far - but how he has done them - in secret without review while lying about them to the American people.
-by Tom G.

Tom, in time of war, it is both prudent and necessary to dissimulate to the people, for their own safety. The enemy is listening as well. Such has been the pattern in every war to date, not just those in which the US has participated.

What amazes and dismays me is the reflexive hatred of Bush the press, academia, certain parts of the CIA and State have displayed. They have justified all manner of compromises of OPSEC in claim of service to a "higher law". In truth, their higher law is restoration of their "rightful" place in society as our betters.

It would not surprise me if it were revealed they had indeed conspired with the enemy (as the Italian Communists have done) to plot our destruction and retreat, just so they could at last hold sway again.
-by Samuel Tai

So far as I've been able to determine, both of the NSA programs leaked to the press lately -- the al-Qaeda wiretapping program, and now the domestic-call data-mining program -- were done with internal review, and with key members of the House and Senate (Democrats and Republicans alike) briefed on the programs and their progress from time to time.

For a top-secret program during wartime, that's all I'd ask, frankly. (Well, not quite -- I'd also appreciate the news media keeping their traps shut about it.)

As for lying, well, I'm not aware of any lies Bush has told about these programs -- and no Clintonian evasions, either. (No, he didn't tell us about these programs when he had opportunities to do so. That's why they're called "secret". But I don't recall him ever saying that American phone records would be kept away from the NSA, or that Americans who speak to al-Qaeda representatives abroad need not fear wiretapping. Had he said these things, that would be lying.)

Perhaps I shouldn't have said that. It's been my experience that the "Bush lied" meme has all the trappings of religious doctrine now -- people either believe it, or they don't, and if they do, very little will persuade them otherwise.
-by Dan in Brookline

Constitutionally, collecting the data from call registers regarding what telephone number called what other number, whether the call connected and how long the call lasted, is NOT a search for Fourth Amendment jurisprudence. I do understand that there are some laws made by Congress that tell the phone companies that they are not allowed to disclose that data. However, in a conflict of laws situation the Constitution takes priority. Thus the government, under established case law, has a Constitutional ability to gather that data.

Case law says that the telephone user has knowingly put that data into the public eye. Remember too that the government still must prove who was on each end of the telephone during that string of 30 minute conversations between the number in Pakistan and the number in Podunk. This data gathering only allows the government to establish probable cause, not to mount a successful prosecution.
-by tex_airhead