The rock group Godsmack got it's name from an Alice in Chains song about the lure and horrors of heroin:

What in god’s name have you done?
Stick your arm for some real fun

For the horse you’ve grown much fonder
Than for me, that I don’t ponder
As the hair of one who bit you
Smiling bite your own self, too

So be yearning all your life
Twisting, turning like a knife

Now you know the reasons why
Can’t get high, or you will die
Or you’ll die
-God Smack, Alice in Chains
Alice and Chains broke up when their lead singer Layne Staley died of a drug overdose - heroin and cocaine mixture called a speedball - but the band Godsmack lives on. Recently, their songs Awake and Sick of Life were used in US Navy recruitment ads, and RightWingSparkle brings us up to date on the controversy:
I happened to flip to Showbiz Tonight last night and the host was interviewing the lead of Godsmack, a band I have heard of, but never listened to. (They have the #1 selling album I hear) What caught my attention was the host asking how did it feel for Godsmack to be in this controversy by allowing their music to be played on a Navy recruitment commercial.
Sparkle has the full interview with Sully Erna on her site, including this exchange: 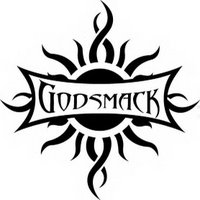 SULLY: My thing is… Listen, here’s my thing with the military. I’m not saying our government is perfect. Because I know that we make some mistakes and we do sh*tty things BUT, BUT. You wouldn’t have your job, and we wouldn’t have our lives, if we weren’t out there protecting this country so we could lead a free life. So there’s kind of a ying and a yang to that. Sometimes it’s not always the best choices that we make, or we stick our noses in other people’s sh*t, but at the same time, we protect this place enough that we’re able to like pursue careers and do what a lot of people in other countries aren’t able to do. They’re kind of picked and they’re chosen to be whatever they become… I’m, I’m, I’m proud to be an American, I’ll tell you that.

JAY: So your country, right or wrong?

SULLY: Uh, no. Not right or wrong. But I’m proud to be an American. I love my country. I’ve seen the depressions and how people live in other countries and how they’re told what to be, and they don’t have the choices that we have. I do love that about our country. So, you know… And I actually sympathize with a lot of the soliders, and the military in general, that are trained to go out and protect FOR us, and what they have to go through, it’s really kind of sh*itty in a sense that these young kids have to go over there and die, sometimes, for something that isn’t our f*cking problem. And that kind of sucks. So what I have to do is at least support them, because they don’t have the choice that we do.

Commenters at RWS had this to say:

That was totally awesome.

At least the interviewer let us know how he feels- you really CAN'T support the troops and be against the war at the same time.

Finally, some truth from the left.
-by lauraw


I notice Jay was putting words into Sully's mouth. for example:

JAY: Cuz music has a power…?

JAY: So what you say with it, and what you do with it, has an effect…?

Note that these ar JAY'S words, which he is asking Sully to agree with.

JAY: Well, tell me what you mean. You said your music is powerful, it’s got an effect, like you said, and you’re letting the military use it. The military, who are they recruiting? 18-to-30-year-olds, right?

Note that Jay is now using his own words and attributing them to Sully. This is Begging the Question (h/t Jerry)

This particular logical error is repeated in the interview as well as others. IMO, this Jay is a self-righteous a-hole. His only effect will be to PO Sully and possibly make him more politically aware.
-by BigDog


Here's how it works: if a 16yo wants to have an abortion, she's an adult whose wishes should be respected. If an 18yo joins the military, she's a poor deluded child (Mama Moonbat: these children are coming home in boxes!)
-by beautifulatrocities

It truly makes me ill that people like this who are allowed to say what they wish and enjoy our freedoms because of the military actually HATES the military.

Yep, those darned freedoms sure can be tricky sometimes.

My take on the article:

Radio host was an ambushing jerk with a knack for forcing someone into a corner through rhetorical sleight-of-hand.

Band member was treated unfairly, but probably ought to be a little more aware of his world.
-by andy

Interviews like this and the LA Times column by Joel Stein last year in which he openly stated he does not support the troops are indications of what I expect to see soon stated more openly by more leftists and anti-war types as they believe they're winning the public debate and can be honest.

Music
Posted by Christopher R Taylor at 11:06 AM