Never attribute malice to something better explained by sloth or incompetence.
One of the charges most often leveled against the press by any political party or person of any ideology is that they are biased. Biased against them, biased for the other guy, slanted in their coverage. Conservatives point to stories and one set of facts, liberals point to other stories and other sets of facts, and the media claims snowy-white innocence and purity. So is there bias in the media, does the news media carefully craft stories to hurt one political party or help another, is there a sinister cabal of cigar-smoking media moguls sitting around a table deciding how things go and what will be said tomorrow?

Whether bias is present in a their work or not, the news media is suffering a series of setbacks and losing audience rapidly. Circulation of newspapers is down sales of news magazines such as Time and Newsweek are lower, and viewing of almost all television news shows and channels is lower – with Fox and MSNBC being the exception.

First, the task that must be addressed is to define what bias is and is not. There are many times which bias is not the source of a problem, and times that it is. Sometimes it is the bias of the reader that perceives problems, rather than a problem of the news media. There are several categories of problems both real and apparent that the media suffers from in it's coverage of events.

Each on one of these areas will take a significant amount of coverage to express with examples and citations to show where and how they happened, so each will be taken as a separate essay.
ERROR
Newspapers, news magazines, and other media news sources have always had to face the fact that human beings are fallible and will make mistakes. There’s rarely a regular newspaper that goes out without a small section correcting mistakes made in the previous day’s paper, and while spell-checking and editors try their best, occasionally spelling mistakes will make it through the system into print. The process of proofreading and checking is so smooth and practiced at this point that such errors are real, but when a newspaper prints tens of thousands of words a week, it is unavoidable. Sometimes the errors will be using homonyms incorrect (there instead of their, for example – something spell checkers will not catch because both are spelled correctly), or even an embarrassing sort of sentence collection.

Ladies, don't forget the rummage sale. It's a chance to get rid of those things not worth keeping around the house. Don't forget your husbands.

This is the kind of mistake that, apart from a source of amusement, is acceptable and does not present the appearance of any sort of political, religious, or ideological bent. It is possible, however, to make an error that seems to betray bias.

Example:
Talk show host KTRS St Louis Dave Lenihan was discussing the possibility of US Secretary of State Condoleeza Rice taking over the Paul Tabliabue’s job as commissioner of the National Football League:

I didn't mean that. It was just a slip of the tongue. She's definitely got all the attributes to be commissioner. I'm really sorry about that.

Now, this could be taken as the kind of hateful bias against Condoleeza Rice that Ted Rall’s described in a political cartoon as a “house nigger,” in the Washington Post, or the LA Times column which said

Loyalty has been the price of admission to this administration, and black conservatives have proved to be more loyal than most.

That has unfortunately, but not always unfairly, invited comparisons to slave times, when the most loyal blacks were those who worked in closest proximity to their white masters — house Negroes, as they were derisively known.

With this kind of commentary (and it’s only a small portion of the rhetoric regarding Colin Powell and Condoleeza Rice alone for the crime of Republican While Being Black (RWBB) it is easy to view this radio host’s response as a sort of freudian slip, an attack on the Bush presidency by someone unable to contain his bias. But it was a genuine mistake, the man was praising Dr Rice and her accomplishments, and instead of saying “coup” said “coon” by accident. This unfortunate mistake ended with the radio station admitting it was a mistake, with Condoleeza Rice accepting the apology from Mr Lenihan, but his being fired anyway. In short, it was a stupid, sad mistake, not bias.

However, there’s another kind event that can be more difficult to discern if it is a mistake or not. On November 21st, 2005, CNN ran footage of a speech by Vice President Cheney at the American Enterprise Institute. Several times in the speech a large black X appeared over the Vice President’s face for less than a second. CNN called it a technical error, others pointed to several incidents in the past where CNN has had what they called technical errors, always at the expense of a Republican.

Subliminal advertising was outlawed in the United States and many other countries because of its presumed potent effect on many people. The average person can see things no faster than 1/10th of a second, and if an image is flashed at or slightly slower than this speed, the brain may be able to pick up what was shown or said – if it is simple enough – but may not consciously notice the image. That’s the theory behind subliminal messaging. This kind of advertising is said to prompt urges in people without their thinking about it consciously. During World War 1, the United States government allegedly used subliminal messages in songs and posters to attempt to increase numbers in the draft. In the 2000 campaign, the Bush for President team ran an ad that had the word “Bureaucrats” flashed on the screen, and allegedly the word RATS was the only part that showed up in one frame. While likely accurate that at least some bureaucrats are quite ratty, the Gore campaign complained about this ad.

Was this an attempt to use a subliminal message that is negative to the Vice President? Was this an attempt to imprint in peoples’ minds a negative idea of the man, or to portray what he said as false? Or was it a genuine error that somehow managed to show up repeatedly and only at this one time? How likely is it that a giant black X was cued up and ready to use on CNN and was triggered very briefly over and over? There’s no way of knowing whether this was intentional or not, and it may have been an genuine error.

It is an easy out for any public figure to simply say “well, that was just a mistake, oops!” Certainly everyone makes mistakes, and the more public a person is, the more public their errors are. Some degree of latitude has to be offered to anyone who works with words and is in the public eye constantly. But when these errors form a pattern, when they can be categorized along a certain ideological lines, then the mistake excuse is a bit less easy to swallow.

*UPDATE: Take a look at these two pictures and see if you notice a difference: 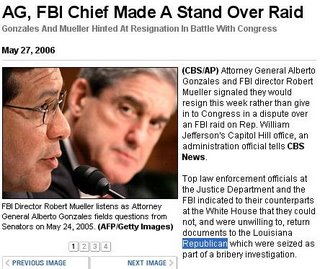 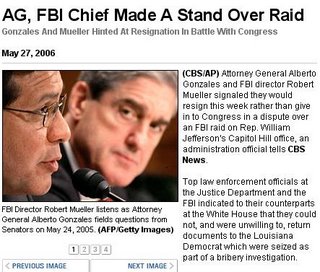 William Jefferson is, of course, a Democrat. The first picture ran earlier today, and as of 5:30 PM PST had been changed to the second picture. Honest mistake? Possibly, but at the same time, it might betray a certain viewpoint of the writer. Instead of checking the party, did they just presume he must be Democrat? A wag on the Ace of Spades Headquarters imagined this exchange:

Editor: Another corrupt Congressman! These white male Republicans will stop at nothing!

Asst Producer: Uh, sir, in this photo, he looks black.

Editor: But, but... there are no black Republicans!

Asst Producer: Maybe we should embargo this until we can check it out.

Editor: No, no. Just run it and we will confirm he is white later.
-by Terry Notus

If this was a simple mistake, it's a sad one because rather than being upfront about their error and correcting it the way blogs do, CBS simply slipped in a fixed version without notice, updating, or even any sort of indication of a change.

For example, I moved the cartoon of Condoleeza Rice to where I meant it to be originally and removed the quote marks from around the introductory line, since I'm the originator of the sentance and don't need to quote myself. That's how blogs work: up front, obvious, open corrections without hiding errors. Without this clarity and honesty, bias will appear more likely in a source, especially in a source that seems to consistently make mistakes that target one particular political party or ideology.

Essays
Posted by Christopher R Taylor at 8:21 AM