"I've always felt that hijabis are discriminated against in the Arab world much more than in the West, and I've experienced it first hand." 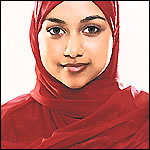 In the past, women wearing scarves was a common thing, even in the United States. My mother used to wear one to keep her ears warm in cold weather, but since she changed her hair style a scarf mashes it down so much she goes without. Not so long ago it was popular for young teen girls in the United States to wear scarves, and the image of the grandmother in a scarf was so ubiquetous in Russia the word for Grandmother in Russian (Babushka - бабушка) is simply the word for scarf, with the accent on a different syllable for each to distinguish between them.

The UAE blog Green Print is by an Arabic Girl named Noor (like the Queen of Jordan), and she had some thoughts recently on the hijab, the scarf muslim girls wear:

Wearing a scarf is one of the biggest choices a Muslim girl can make. For some, the choice to do so or not is expected, for others, the choice is extremely difficult. But regardless of the difficulty of the situation, the resulting choice marks a girl in nearly all aspects of her life.

She notes that not all Muslim girls wear the hijab, and points out why she does:
So why haven't these girls and i, especially those of us who weren't pressured into it, gone ahead and done so? In short, the answer is this: Because we believe in hijab and what it stands for. Hijab is the Muslim woman's show of modesty. There are many different ways of wearing it and different beliefs as to how much skin a woman should cover, but the general idea is the same.

Noor shares an incident that happened with another girl:

At AUS's Global Day, there was a Syrian traditional dance going on, called a 'dabkeh'. I jumped in, grabbing the hand of a poufy-haired, makeup-y girl. Now, i don't have anything against girls with that description - when they're nice. But this one totally tried to ignore me. She was barely holding my hand, practically ruining the dabkeh, and then halfway through, she ran to the other side of the dabkeh where some other poufy-haired, makeup-y girls were.

Now, why exactly did she do this? Because i wasn't as poufy-haired and makeup-y as she was. I promise you, if i'd been wearing a miniskirt and full on makeup and had my hair done, she would've stayed next to me. But no, being a hijabi is just not cool enough. Actually, being anything short of a sex toy is not cool enough. Now that that's said, i have to turn around and say that the situation isn't always like that. Most non-hijabi girls are as sweet as can be; one of my closest friends isn't hijabi. But we've gotta recognize this issue, this 'hijabism' in Arab society. If we want to be recognized in the West, then we've gotta be recognized in our own countries first.

Wow!..some strong words there. And i think i agree with everything you've said...although I've not personally witnessed any particular act of discrimination. However, from a male perspective, I know alotta guys who do not want to be with hijabis because they feel that its religiously wrong to do so. But, since im not a Muslim, i dont knw if thats true or not. But i guess it just comes down to maintaining that fine balance between tradition and novelty.
-by Mathew


Nice post and blog :) I've always felt that hijabis are discriminated against in the Arab world much more than in the West, and I've experienced it first hand. As if Arab women aren't already discriminated against as a whole, some make it worse by discriminating against their fellow hijabis because they think that the latter have hurt their struggle for women's rights. Before we ask for rights equal to men or women in the West, we need start respecting ourselves and the individuals around us for who they are, not how they look.

Oh, and I must say I like the "hijabism" terminology!
-by Moi


Well, there is another side to the story, of course. I don't blame those who are suspicious of the hijabis, as you say. You said it yourself when you say that the cloth is an affirmation of your faith. Maybe those women aren't interested in religion and they should have the right to have that opinion. So when they see a girl with a headscarf they assume someone who IS religious!

There IS a logical connection, you know.
-by pro-freedom

I know this isn't the most earth-shattering topic, and it doesn't compare in deep significance to some other issues of the day or things I've covered. It's just a glimpse into another culture, another nation, and some thoughts on something we in the west take all too granted: freedom and religious liberty.

International
Posted by Christopher R Taylor at 9:14 AM