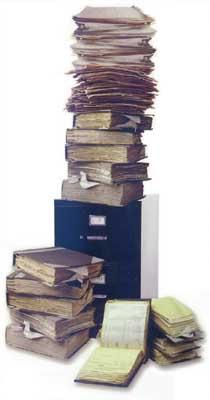 One of the less-considered aspects of the internet is that everything that you have ever written, posted, or sent somewhere is saved. These files contain all the comments you've made, all the messages on message boards, records of where your IP address has traveled, the names of files that address has downloaded, etc. When you say something on a comment board, it's out there somewhere, if not forever, at least long enough that you may regret it.

The Archive comment is one in which things that a person has posted long ago are brought back up to make a point, have some fun, or repeat something particularly accurate or thoughtful. Often this kind of comment will be a series of previous posts, or excerpts from them containing information that a person said about themselves or about a topic. This often is used to point out a change of opinion or an embarrassing inconsistency.

For example, someone may have claimed to be in the military in the past, and when pressed was unable to accurately and realistically depict certain aspects of this military life. Months pass, and this person makes the claim again in an attempt to argue from authority, and the archive post will reveal the inconsistent details of the past.
Hypocrisy is sometimes pointed out by this sort of post, especially if someone complains a lot about spelling or profanity and rudeness, then is particularly rude or writes a terrible sentance. The archive post will detail these previous complaints.

But an archive is not always insulting or an attack, sometimes it can be a gesture of respect or a quote of something particularly well-said or to the point. This kind of archive is similar to quoting from any other source on the internet, in this case, it just happens to be of someone's comment from the past.

Archives bring up two things to remember when posting on comment and message boards. First, remember that what you've said in the past can be recovered and quoted again, so try to be consistent and tell the truth - lies will come back and bite you. Second, remember great things people have said, even save them off, because they can be useful for a discussion later on. Archive posts are not considered bad manners on the internet, but they can be a bit tedious if that's all you have to offer. Simply throwing something that a person said in the past in their face for the sake of an insult is little more than a flame and might not be welcome.

Comments
Posted by Christopher R Taylor at 7:43 AM