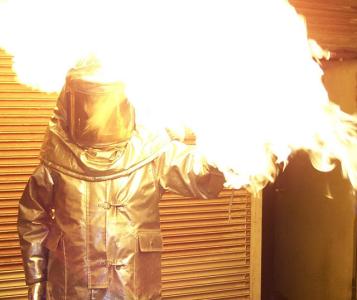 THE FLAME
A Flame comment is one that is largely or exclusively devoted to attacking a person or persons that have commented before, or the blog owner. Often this kind of post serves only to mock the website or it's author(s) in a general sense, although usually the flame is directed at a person. Flame comments are an old problem on the internet, one that has been in existence on message boards and the Usenet since the very earliest days of the internet. The name likely comes from the heat of anger or burning down one's opponent rather than discussing matters rationally. A Flame post is dedicated to ad hominem attack, either a long complicated one or a series of them.

Instead of refuting what someone says, the ad hominem argument simply attacks them personally, trying to discredit or intimidate, or at least distract people from the point they are making. Rather than "your argument is wrong because of these facts and this logical conclusion" the flame says "you are wrong because you are a big fat doo-doo head and spell poorly." As one could guess, the Grammar Police post is often a type of flame comment.

There is an internet site that has different types of "Flame Warriors" listed, dealing with the type of person commenting rather than their comment types, and it has some amusing and accurate depictions of people one might meet.

Sometimes a flame can be an amusing read, it can be done in such a way that it is only for fun, but in almost all cases the flame is a personal attack, it is rude, unpleasant, and often quite cruel. The flame is almost always intended to hurt the opponent - often in a defensive and fearful reaction because they have proved you wrong or made you feel foolish. Don't lash out like this, it's almost always unwelcome on message boards and comment sections, and demonstrates not your superiority, but at least a temporary immaturity and inability to respond to the arguments and points made. Being anonymous is no excuse for being childish, bitter, and mean-spirited.

Comments
Posted by Christopher R Taylor at 8:33 AM

It was rather interesting for me to read that article. Thanks for it. I like such themes and anything connected to this matter. I definitely want to read a bit more on that blog soon.

Interesting post as for me. It would be great to read more about that theme. Thanks for sharing this data.